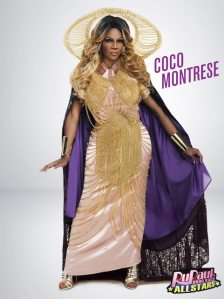 WOW’s not joking bitch, Coco Montrese is back (and hopefully without the tang highlight)! Considering how over-saturated All Stars 2  is with season 5 fan favorites, it’s a bit unusual that Coco was given another chance to compete for the crown- even more so given how there’s no season 1 or 3 representation. Coco is an incredible lip sync assassin,  but she lacks the fan love of her fellow competitors, and as much as we want to deny it- unpopular queens are never given a fair shot; they’re either cut prematurely or forced into a villain edit. Coco would have to slay every challenge to convince the judges (and editors) to keep her in the running for the crown.

It’s reported that our favorite “hog body” hoe storms off set during the season. Whether or not that’s true it’s likely that Adore will find herself outgunned by her fellow competitors. Adore is a wonderful singer with a massive fan base, but her Kurt Cobain/dumpster drag aesthetic has been repeatedly criticized by queens and fans alike. Adore’s underdog act may have been to her benefit in season 6, but with a cast this polished and beloved, it’s unlikely the judges will be as kind a second time around. If her hem doesn’t hit the floor, she’s getting the boot. 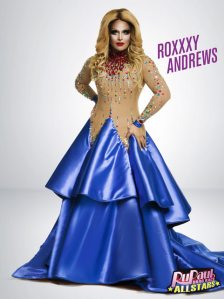 Roxxxy Andrews received the “villain edit” in season 5 with her tirade against Jinkx Monsoon, but unlike Phi Phi O’Hara she’s yet to win over the haters. Roxxxy’s talents are undeniable: she’s a fierce performer, excellent seamstress, and a better actress than she gives herself credit for. But in a season full of fan favorites can she snatch the crown? 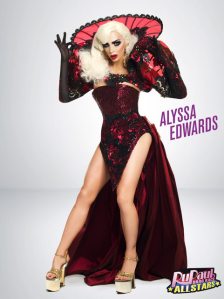 Alyssa may have been a bit polarizing on season 5, but she has since won over the RPDR fandom with her hit web series, Alyssa’s Secret. She may not be a singer, or a damn seamstress, but she’s a fierce performer, and is also responsible for at least 75% of the Drag Race GIFs on the Internet. She may be universally loved now, but it’s unclear if she’s really improved upon the skill issues that sent her packing in season 5. Funny catchphrases and fierce lip syncs can only save you so many times, mawma.

Ginger Minj was arguably the most well rounded queen from season 7. She could sing, act, tell jokes, and do it with the kind of unshakable confidence that Trixie and Katya couldn’t muster. But with a cast full of queens who are more than just their aesthetic it is unlikely that Ginger Minj will be able to dominate as she did in her season. And with only a year between season 7 and All Stars filming, has Ginger really had the time to improve her drag enough to take home the crown?

Out of all the All Stars queens, Tatianna has had the most time to grow and hone her craft, in fact; she’s had almost 6 years to do it! She may have been insecure and a little unprepared in the fashion department during season 2, but since then Tatianna has grown into an incredibly fierce queen. She’s funny, she’s beautiful, she’s fierce, and she’s ready to compete with the best of them.

No queen has redeemed herself like Phi Phi O’Hara. Girl went from most hated bitch in Drag Race herstory to highly praised queen with a huge following thanks in part to her mesmerizing “365 Days of Drag.” She’s a drag chameleon who has grown into her own, which makes her fierce competition. The only question is whether or not her questionable acting abilities will keep her out of the final running.

If Detox’s promo photo is any indication of her performance in All Stars  then bitch is truly going to slay the competition. Detox can sing, act, turn out a look, and lip sync the house down boots. Odds are she’ll be shantaying her way to the top 3. 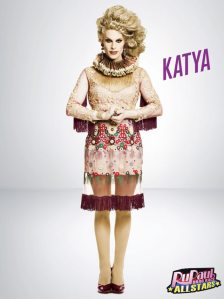 As the breakout star of season 7, Katya stole the hearts of RPDR fans with her kooky confessionals, relatable personality, and hilarious sense of humor. She may have let her anxiety and self doubts get the best of her during the season, but since then Katya has grown into a more confident, self assured performer. Fans have already predicted her to make the top 2, and given her skill set I’m inclined to agree.

Alaska may not have won season 5, but she won over the fan base with her unique style, wit, and endless creativity. Out of all the queens this season, she’s the closest thing we have to an All Star. She’s dominated the YouTube scene, released a highly acclaimed album, and has managed to become even more popular as time has passed. Alaska is a singer/actor/performer/artist/alien and it’s only a matter of time until Drag Race Superstar is added to that list.