Miley Cyrus is the Betty Spaghetti doll I never had and never wanted.

Taylor, what did I tell you about playing “Dress up” in your Nana’s clothes?!

Nicki is really embracing the whole “dress for the job you want but will never have” thing, which is that of a classy human being.

Kim looks like a soggy parcel bag from Fed Ex and Kanye West is wearing scrubs. Tell me again how these heifers are fashion icons?

Fun Fact: Melissa Etheridge actually wrote “Come To My Window” about Justin Bieber. Ugh, can’t we just have Kate McKinnon be him 24/7?

Kylie is literally just a less soggy version of Kim.

You can’t really make fun of Vanessa’s outfit because it’s a tribute to all of the girls who accidentally OD’d at Coachella.

Sensible. I don’t hate it.

Sensible. I do hate it.

Fun fact: Ciara’s dress was originally not frayed; it was only frayed after she had to scale the building and fight her way through security to gain access to the event.

It took me about 10 full seconds to realize I wasn’t looking at some sort of optical illusion. Also, Lady Gaga did this already, wench:

I don’t care how many cows I’d have to kill to get to his beef.

Aw, it’s so nice Elton John’s enema bulb could make it to the show!

I think both Jillian and I are confused as to why she’s at the VMAs.

She looks like someone “Weekend At Bernie’d” a hooker. 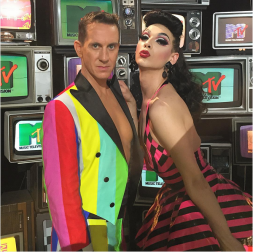 It’s only fitting that the most put together lady at the VMAs was a drag queen.