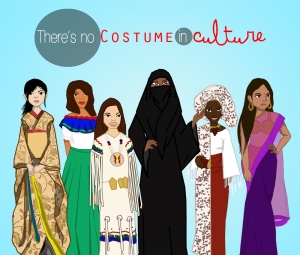 As a college student, I have a tendency to forget that I live in a bubble and that a good deal of the population does not share the same liberal beliefs that I do; thank God I have social media to remind me of my naive ignorance. Every time I log onto Facebook, or click on a BuzzFeed discussion thread, I am bombarded with ignorant and thoughtless comments; statements so ridiculous and thickheaded that I actually have to convince myself that it’s pure trolling to keep myself from punching a wall. Now that Halloween is less than a week away, all of the comments are revolving around a rather straightforward concept that people seem to have difficulty understanding: cultural appropriation.

People like to justify cultural appropriation by citing some fictitious war on freedom of speech and/or political correctness. They say it’s okay to wear a native headdress because it’s funny/flattering, or because racism no longer exists, or because they fail to understand that not finding something offensive and whether or not that said thing is offensive are two completely different things. They justify dressing up like Caitlyn Jenner with misogynistic and transphobic arguments, all of which ultimately make the same point: I’ve never personally experienced this sort of oppression or discrimination therefore it’s insignificant or nonexistent.And don’t even get me started on the people who justify racist, appropriative costumes by claiming that they too were discriminated against as a descendant of Irish or Italian immigrants. Newsflash white people, we aren’t discriminated against in the same way of people of color, just accept it.

What some people fail to understand is that oppression and discrimination are not equal amongst people. People with autism are treated differently from people of color, and Asian women are treated differently than Asian men and so on. We cannot and should not determine whether or not something’s offensive by our personal relationship with the idea or topic. Someone may think it’s funny to poorly dress up like Caitlyn Jenner and make jokes about her around their likeminded friends, but they don’t get what it’s like to be trans or see what kind of message that sends to other trans people. They don’t get that it’s problematic because they can walk away from that identity at the end of the night without fear of being catcalled or even murdered, unlike many trans people. It’s the same thing with Native Americans! You can wear a headdress and think you look Coachella or spout some “imitation is the sincerest form of flattery” bullshit, but you fail to realize that  Native American headdresses are often described as the equivalent of Western war medals. As Neha Shah puts it, “you wouldn’t desecrate a military uniform, so why dishonor a headdress?”

Beyond appropriation, whatever happened to people apologizing and refraining from doing something solely because it could hurt someone else’s feelings? Why do people get all up in arms when they’re called out on their discriminatory and appropriative bullshit, instead of simply apologizing and acknowledging that their thoughtlessness could have hurt someone else? And on top of that- why do we live in a society where commercialized humor is embraced or even entertained? Newsflash people, buying a “funny” costume does not make you a funny person; it makes you lazy and unoriginal- it just says “Hey, I’m wearing something a company predicted dumb people would find funny, which means that I’m not only a mass consuming idiot, I’m 50 dollars poorer!”

People like to lump these type of conversations with the whole “millennials are too PC/what’s happening to freedom of speech” hysteria that’s happening in this country. I don’t believe appropriative halloween costumes are part of this debate; you have every right to go out and wear your bullshit costume, just know that people will respond, and that you will have to deal with the consequences of your nonsense. If you have an opinion on something, an opinion that is well supported and has actual substance, you should never feel like you cannot say it simply because it’s unpopular- but that isn’t the issue in this scenario. Unless you’re making some sort of credible statement with your Halloween costume, there’s no real infringement on freedom of speech, is there? Maybe I’m wrong- I’d really love to listen a douchey frat bro dressed like Caitlyn Jenner come up with a compelling argument as to how him wearing that costume isn’t problematic.

People shouldn’t get upset about having their sense of humor policed; if you can’t think of any other way to be funny than by wearing an offensive costume, perhaps you aren’t too fucking funny in the first place.  At the end of the day you shouldn’t steal a person’s shoes, unless you’re willing to walk a mile in them.