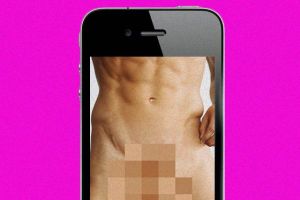 If you’re a lady or dainty homosexual man, you’ve most likely received an unsolicited dick pic at some point or another during your college career or young adult life. Odds are that you received a picture at 2 in the morning of a guy:

a.) “discreetly” comparing his penis to something like a coke can to flaunt the size

c.) showing off his semi-erect penis because he’s unaware that the only thing grosser than an erect penis is a half-erect penis.

This past month I’ve received not one but TWO unsolicited dick pics from a guy at 9 in the morning via Snapchat. Now it’s important to know that there was no witty banter or conversation prior to the first submission; in fact, I hadn’t even spoken to the sender at all in the past year. I simply woke up to find a 5 second Snapchat of a guy showing off his boner in bed. Upon receiving said image, I screamed. I did not respond, however, because although I wanted to explain how inappropriate and frankly gross the photo was I did not want to engage in any confrontation. When I received a second photo two weeks later though I decided that some action needed to be taken. So I did what anyone would do in this kind of situation: I took a screen-shot of the pic to strike the fear of God into him and then ignored his panicked message about what I was planning on doing with the picture I had already deleted. And then I wrote this. So if you’re a guy considering sending me a dick pic just know that I am the T-Swift of dick pics and that I will write a blog post about your average penis interfering with my morning tea.

For some reason some guys truly believe that their dicks are something others want to ogle and worship. They think by sending a picture of their weiner they are doing a good deed or sharing the low-res, low budget we’ve all been dying to see.It’s as if they think the human penis is the most majestic thing to ever grace the planet and not just a really veiny looking hot dog. What’s worse is that they send these kinds of pictures so often that we’ve pretty much accepted them as an irritating and inevitable reality like mosquito bites and taxes. Instead of holding these men culpable for their disgusting and misogynistic actions we simply say they’re stupid or chalk it all up to some kind of “boys will be boys” mentality.

But the reality is this- we’re letting them off easy! Spoiler alert, people: MEN AREN’T STUPID! They know exactly what they’re doing; that’s why they’ve been running the game for thousands of years. The truth is that many men are still stuck in prehistoric ways of thinking and believe they are entitled to whatever and whoever they want. By not voicing our grievances we are giving them a free pass. By not voicing our grievances we are contributing to unsolicited dick pic culture!

Maybe some people like the scandalous nature of unsolicited dick pics, and that’s great for them, but guys need to operate under the assumption that most people don’t want them. No one should be forced to look at a shriveled penis they have no interest in touching. Consensual nudes are one thing, but unwanted and uninvited are another, and men need to learn that real quick. If you receive an unsolicited and unwanted dick pic you should do one of the 4 following things:

1.) Send this gif over and over until he blocks you:

2.) Scream at that motherfucker and teach him Feminism 101 from the Seneca Falls Convention to every insightful tweet Amandla Stenberg has published.

3.) Tell the perp’s mother, significant other, or anyone who has the ability to punish them in person.

4.) Drive to his house and make a eunuch out of him (*may result in prison sentence*)

These actions may seem extreme, but they’re really not. If you let someone get away with bad behavior they will simply continue to act badly. The only way to really combat misogyny and male entitlement is by roasting the asses of pigheaded men.