1. You’re forced to spend the entire day with your family.

You know, I don’t know why people hate on Jack Nicholson’s character from the Shining. I would do the same thing if I was trapped in a house with my family for more than 24 hours. Thanksgiving is just that. It’s like a never ending vortex of hell with no escape as you’re forced to interact with the people you love the most but can stand the least: you’re nosey mother, manic sister, loud brother and embarrassing father.

2. It makes no sense

In what way does the decimation of natives relate to themes of family togetherness? Thanksgiving literally makes no sense as a holiday. It’s only purpose is to serve as a day where you sit around with your family and eat dinner-except this dinner is somehow more significant because you are  eating a bird with balls hanging from its chin. 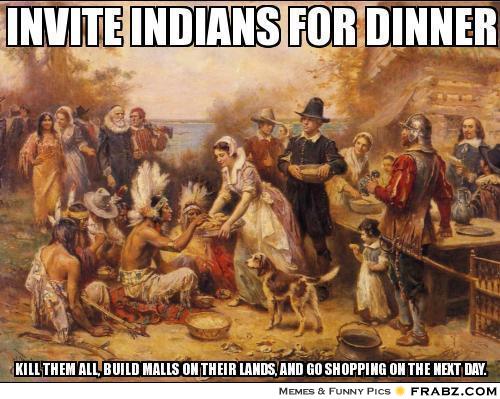 3. You have to play nice with all of the relatives you can’t stand.

In many households, Thanksgiving is a holiday that involves more than just your immediate family. This means you have to interact with the people who are less likely to tolerate your bullshit. You’re forced to interact with your racist grandfather, idiot cousin and drunk uncle and what’s worse is that you have to pretend you like them- because your mother threatened to stop paying your phone bill otherwise.

4. The food isn’t even that good (depending on the skill level of the cook)

When asked why they like Thanksgiving, most people say that they love it for the wide array of food present. But if you come from a household with a cook that can’t even boil water properly, you don’t get this same pleasure. Thanksgiving dinner ends up being an array of bland meats, lukewarm side dishes and Costco brand pies. And if you’re going to be forced to interact with people that make you want to gouge your eyes out, you need good food to calm your manic urges.

5. There’s nothing to do after dinner.

As Thanksgiving circles entirely around dinner, once the meal ends there is nothing left to do. While some families may have invented family games and activities to combat this issue, others are forced to just sit around in a circle and engage in awkward small talk. At least during dinner I could avoid talking to the people I hate by stuffing my face full of mashed potatoes. Here’s to hoping your family lets you drink at the dinner table…God knows you need alcohol to get through this part.

6. You’re forced to relive the holiday over and over

In my household, Thanksgiving dinner never ends. My mother puts all of the leftovers in the fridge or makes a godawful soup out of the Turkey remains and forces us to eat it because there are starving children in Africa. Getting through the actual holiday was stressful enough as is, I don’t need a constant reminder of it every time I open the fridge and see 7 tupperware containers of stuffing.

27 thoughts on “6 Reasons Thanksgiving Is The Worst”