1. Love Actually: It is a really good idea to tell your best friend’s wife you‘re into them.

Yeah yeah yeah the whole “To me, you are perfect” thing is adorable. But to me, you are just a homewrecker. Like we get you had to somehow explain why you creepily filmed her up close the whole wedding but can’t you bullshit something like the camera broke? You just created a lot of awkward teatimes and matches of cricket (what i assume British people do in their free time) for your future.

2. Rudolph the Red Nose Reindeer: Being different is a bad thing. 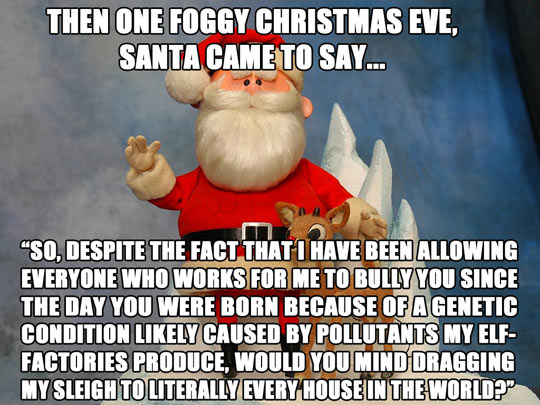 Rudolph’s dad and Santa are pretty big douchebags in this movie. Rudolph is comfortable with his unique red nose but his Dad wants him to hide it giving Rudolph some serious Daddy issues. Also, in this Santa is a bully and tells Rudolph he should be ashamed of himself! It’s like he is possessed by the devil or something. This film sheds light on how oppressive Elf society is as well. It’s almost as if Hermie was going around saying he wanted to be an elf prostitute or hunt reindeer.  Even when Rudolph saves the day no one says sorry and I bet once Santa installs some headlights he will drop Rudolph.  Basically, if you are different you better find use for yourself or else Santa will hate you.

3. The Grinch: If people were mean to you as a kid, that gives you the right to be an ass/ a criminal.

Okay some kids laughed at you once Grinch. It’s a little melodramatic to take to a cave your whole life. Also why do the two lesbians who raised you not care that their child ran away? Maybe you were green and different but all the people of Whoville look a little fugly. Also, when the Grinch robs the whole town they are all super relaxed about it like it ain’t no thang but in real life that would be thirty to life.

4. Home Alone: If your parents leave you alone, you should try to battle criminals by yourself instead of going to the police.

Even though the police seem to suck in Chicago (they only check the house once for Kevin after his parent’s file a missing person case from Paris)  I think they’d be a better bet than trying to ward off two grown man. Also, it’s always bothered me and I know has been critiqued a lot that Kevin can call to get delivery pizza even though the phone line is suppose to be down.

Can we just talk about the whole premise of the Santa Clause begins with Tim Allen KILLING Santa! Okay, I know it was an accident and it’s not like he shot him but it happened. All the people at the North Pole are so nonchalant about it too. They are like okay cool onto the next one. Also, what happened to Mrs. Clause? Do the elves off her? Why does Tim Allen put on a dead man’s clothes? There are so many unanswered questions in this movie. But basically, if killing Santa means the only consequence is you get his magical powers and no one will ever acknowledge you’re a murderer it seems like a pretty superb deal. One more question… if no parent believes in Santa how do they explain the children getting gifts they didn’t buy? SO MANY QUESTIONS!