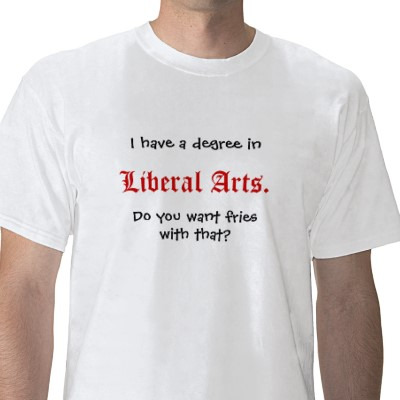 If you’re a liberal arts major then you’ve probably asked yourself at one point or another, “What the fuck am I doing with my life?” I know I have. And I assume most of you who are liberal arts majors have asked yourself this question at least once. When you major in something like engineering or finance, you have at least a slight understanding of how the classes you take prepare you for the real world. In liberal arts classes, this understanding is not always there.  I can’t tell you how many courses I’ve taken that have not positively impacted me any way shape or form. I mean sure I learn a slew of new concepts like “chronemics” and “the transactional model of communication” but that’s all they are, concepts.  I’ve listened to teachers lecture for months about topics that I feel have no relevance to the real world or any practicality. Am I learning? Yes. Am I learning anything useful? Probably not. Sometimes it feels like I’m majoring in nothing. To an extent, it just seems like I’m writing papers and doing bullshit group projects until I’m just randomly handed a diploma one day after unknowingly completing all of my credits.

We all know that liberal arts programs do not have the greatest reputation. They are seen as being irrelevant and impractical fields of studies. In fact to some people, liberal arts majors are one of two things: stuffy, elitists academics or idiots who chose this major simply because they would fail the coursework of another. But it’s not the assumed easiness or self indulgence that bothers people about these majors. But rather it’s the seemingly impractical nature of liberal arts. People ask, “What can you do with a degree in that?” or  say, “It’s nice that you’re pursuing your interests but what kind of job will you be able to get?” People can’t wrap their head around the idea of a major that lacks a predetermined path.

I often feel like I need to belittle my own major in order to be accepted by my peers. It seems like that the only way I can justify being a Communications major is by publicly stating that I think it’s stupid or an easy pass. I often feel guilty or obnoxious when I complain about homework or a project because I know that other majors have it much more worse than I do. I mean how can I complain about a 10 page paper when my Engineering friend has an entire project to do? On the other hand, I’ve noticed that people not only put down their major but the majors of other liberal arts students. It’s like liberal arts majors must convince the rest of the student body that their major isn’t the least impractical. I can’t tell you how many times I’ve heard a student say, “Well at least I’m not a philosophy major” or “Why the hell would anyone major in Asian Studies?” To some it seems like the only way they can justify choosing their major is by invalidating the major of another.

The worst part about being a liberal arts major is that it involves you putting more money in then you’ll ever get out. While many engineers and finance majors make 6 six figures, most liberal arts majors make 5 figures. It’s a little depressing to know that my yearly income will probably be less than my college’s tuition. This whole subject brings up an entirely different issue- What exactly is the point of college? Is college a place where you cultivate your academic interests and grow as an intellectual person or is college a place where you go to gain the knowledge and experience necessary to land a certain job. I know most people would say both, but in reality- if we had to choose between the two, which one would we all choose? I often ask myself if I should pursue what I like to do or pursue what makes the most money. I enjoy taking Communications classes but I can’t say that I’m in love with what I’m learning. I’m at the point in my education that I have taken too many classes to switch. Maybe if I was an art major or a theater major I’d feel less guilty about the expenses because I would know that I was chasing my dreams. But for those of us who are Communications majors or any other liberal arts major- don’t you think we could possibly just suck it up and major in something more financially secure? It seems like most liberal arts majors don’t know what they want to do.. they simply know what they don’t want to do. Is that enough though?

This issue is exacerbated at the school I study at because of its Co-op (internship) program. It is because of my Co-op program that I know there is no true equality of majors. Some majors get paid much more than others and it can be disheartening to know that you’ll never be afforded the same financial opportunities as your friends because you chose a major different from theirs.   I mean it seems like there’s two options- I could either major in Communications and get a low paying job that I like but not have money to do other things like travel or live in a nice house or I could major in something I dislike and have the money to pursue my other hobbies and interests.

There are so many ways to look at the issue. And for those who think being a liberal arts major is easy- it’s not. While some of us may be completely secure and satisfied with our liberal arts programs, not all of us are. So think next time before you make a joke about our major at our expense or act like you’re more worthy because you are majoring in something more “practical”. A lot of us are dealing with this inner conflict and frustration on a regular basis and it would be much appreciated if you didn’t add to it- plus, we most likely already have 500 pages of reading and 3 essays due anyways.

2 thoughts on “What the Hell Am I Doing With My Life: The Rantings of a Liberal Arts Major”