Zetus Lepetus! Maybe I’m just nostalgic but today’s Disney Channel is just not on the level of what it used to be. Seriously, A.N.T. Farm? What is this a center for ants? How can we expect to teach children to read if they can’t fit in the building?  Maybe most lovable was our life guru of the early 2000’s Lizzie McGuire.  Lizzie was an awkward, average B student who was called out for being an outfit repeater and ripped down the curtains at Graduation. Yet she was still way cooler than us as she got to go to Aaron Carter’s “Party” (Remember the Duff vs. Lohan feud over dating Carter?) and date Frankie Muniz before he got ugly/irrelevant.  Aside from cartoon Lizzie only having four fingers on each hand, everything else about her was so fetch. She rocked the bedazzled bellbottom jeans flawlessly, her hair was like an ongoing arts and crafts project (from crimped to braids galore to colored clip ins) and this was pre-Hilary Duff veneers so her teeth did not scare me. I wanted to be her and tried my hardest to do so by investing in choker necklaces and rhinestone everything. Basically, I saw her wearing army pants and flip-flops so I bought army pants and flip-flops. I may have gotten rid of my rhinestone t-shirts and crimping iron but I have not thrown the life lessons Lizzie taught me.

“That’s Kate Sanders. She used to be our other best friend until she bought a bra,”

This quote from the show is something we can all relate to. Well… hopefully your friends learned about and purchased the proper undergarments long ago (“I WANT A BRA.. A BRA!”).   However, as we grow older it becomes easier and easier to lose touch. You reach age 20 and suddenly your Facebook is filled with engagement photos and pregnant bellies instead of duckface selfies or even worse, pregnant girls taking duckface selfies.  Soon you’ll learn even in college people are constantly coming in and out of your life. Maybe your freshman year roommate went on co-op or moved to Allston, the land where hipsters roam free. It is not something we should fret about. As long as you have your Gordo and Miranda or a couple close friends you don’t have to worry about being forever alone.  Also, fyi a true friend will wear a unicorn sweater on school picture day just so you don’t get green paint on your super cool zebra skirt (pretty sure none of my friends like me this much).

Larry Tudgeman aka “The Tudge” uttered this profound statement in the episode where Lizzie was too much of a nice girl to reject him for a date. Even though Larry thought it was acceptable to wear a hideous bowling shirt everyday and never shower, he also wasn’t afraid to be himself.  Basically, don’t be afraid to let your freak flag fly. Chances are you will find another freak like yourself in this huge college community and you can be freaky together. 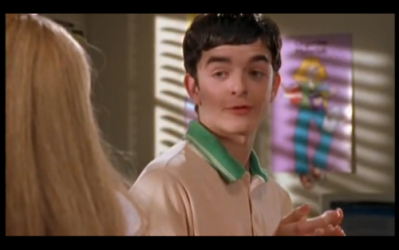 When Lizzie went behind her mother’s back to buy pricey sequined jeans in order to win the coveted title of “Best Dressed” she quickly ruined them when a teacher’s red slushie spilled all over them (If I was a teacher a red slushie would be my beverage of choice too). Her Mom had gone out of her way to buy Lizzie some equally cool clothing from the Bargain Basement for a fraction of the cost. When she rocked the discounted clothes people still thought she had it going on. Basically, being on a budget doesn’t mean your style has to suffer. You too can be your very own best dressed.  Well unless you know a Claire Miller, that byotch.

4. “We need to talk” means “You need to not exist anymore”

I remember being a naïve little Elementary schooler  watching Lizzie McGuire get broken up with by her first boyfriend Ronnie and not knowing that “We need to talk” was the relationship kiss of death. I mean they rollerbladed to a Michelle Branch song. How was that not everlasting love? He was her paperboy and had blonde spiky hair a la Aaron Carter. I don’t know about your hometown but I’m pretty sure mine never had a paperboy. I think those stopped existing around the time milk stopped being delivered to your doorstep via glass bottle. However, now I know paperboys should never be trusted. Also, it taught me that boy logic is seriously disturbed. Ronnie’s excuse for dumping Lizzie for another girl was literally, “She’s right there and stuff”. Such a way with words! Go back to the Jersey Shore Ronnie no one likes you.

5. Evaluate before you friend zone

By the Murder Mystery party it was evident that Lizzie didn’t have a clue Gordo so very clearly liked her. He had even told her in the Ronnie episode that no one was prettier or more fun to be with. Lizzie was too busy loving Ethan Craft to notice. I never really got the whole Ethan thing. He wasn’t very good looking so I thought maybe he was the heir to the Craft Macaroni fortune and that was why he was such a hot commodity. Then I realized they were spelled differently. Anyway, it took a sneaky brownnoser with a hidden agenda, Italian pop star turned Pretty Little Liar and discovering what dreams are made of for Lizzie and Gordo to finally get together. This just goes to show that sometimes the best guys are the ones you originally didn’t even give a second glance.

As previously seen on http://www.hercampus.com/school/northeastern