1. We’re already in way too deep

If you’re a true PLL fan then you’ve been watching every episode since it’s premiere and rolling your eyes every time the writers revealed a new “A” or introduced a subplot that was nothing more than a detour from the greater story. But after 90+ episodes, it’s impossible to stop now because you feel you have an obligation to stick it out and find out who this mysterious person who has been torturing these girls over the course of four seasons is.  I mean if I stop watching now then all of that time would have been wasted.

Every season of Pretty Little Liars there is about 15 episodes where nothing significant happens, 5 episodes that start to put the pieces together and a thrilling finale that reminds you why you watch the show in the first place. Pretty Little Liars sets up the season like dominos- once one big clue is revealed the rest follow and the season picks up steam. So to any non fan it seems like nothing is happening, but to any real fan you know that you are on the verge of finding out a big clue that will lead to a blur of fast paced episodes up until the finale.

The best/worst part of Pretty Little Liars is the dialogue.  In fact, a lot of it sounds like it was written by a 7 year old. But that’s what makes the show great. It’s completely ridiculous. Great lines include, “I don’t trust her as far as I can throw her and Ian’s fetus” and  “All grandparents are old”

One of the most entertaining parts of PLL is yelling at the screen every time a character says or does something that is completely nonsensical or dumb. Some men watch football and scream whenever the players make bad decisions- I scream every time Emily does something stupid. Like for example the time Emily found out that “A” left Spencer drugs and was like “Oh I’ll take them” and Spencer was like “Nah I got it” and then Emily was like “Oh okay”. TAKE THE DRUGS, EMILY! YOUR FRIEND IS AN ADDICT YOU DUMB HOE!

Because we all know half the reason to watch the show is for Aria and Ezra’s relationship and half the reason you want to stop watching the show is because of all of the gratuitous Toby shirtless moments. Newsflash Toby, you’re not hot, you look like Gollum.

We all know the main reason we watch is to see what that crazy bitch “A” will do next. Which usually is something like playing the piano or buying things with his/her credit card. 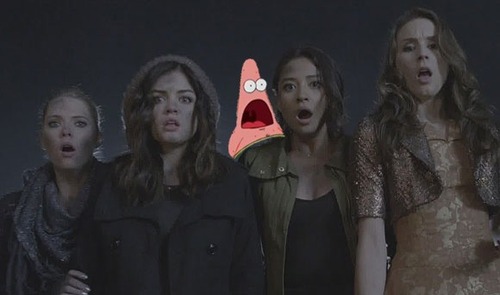