Welcome to RuPaul’s Drag Recap- Rap Battle Edition. That’s right, this week our 9 queens duke it on in a rap challenge spectacular. Because who better to spit mad game than a bunch of cross dressing homosexuals.

This episode begins with the departure of wonky eyed, oat feeling, “crazy cuckoo c*nt” Gia Gunn. Trinity talks more about her HIV status which should be interesting but isn’t because she’s boring and Darienne Lake gives us another reason to hate her when she makes it extremely clear how jealous she is of Ben’s success. To be fair, Ben is a little bit cocky, but it’s hard not to be when only ⅜ of your competitors are actual threats.

In the great tradition of  “Paris is Burning”, our queens take a trip to the library and read each other.  Best read goes to Adore who essentially tells Laganja to drop dead (because let’s face it, we’d all like to see that happen.) For some reason, however, Darienne wins the mini challenge and is able to pick her own team members for the main challenge, a music video for RuPaul’s rap hit “Oh No She Better Don’t”. I’m pretty sure the only reason Darienne was chosen as the winner was because the producers wanted to stoke the tensions between her and Ben. And it worked- Darienne does not choose Ben for her team, which upsets Ben and leads to a very uncomfortable conversation between the two later in the episode.

For the most part, the entire rap challenge is a mess and almost every queen stumbles upon her words and has difficulty finding the rhythm. Darienne feels as white as she looks and delivers a terribly awkward performance. Milk comes out her usual quirky self but finds the judges no longer have the patience for her stagnancy. Laganja is an idiot, per usual and Courtney delivers yet another completely forgettable performance while Ben is passably mediocre. And Trinity sucks- but at this point do we really need to point that out? I mean it seems pretty clear to everyone that Trinity’s only talent is lip syncing and weave flipping which you know would be impressive if this was America’s Next Top Weave Model.

Adore, Bianca and Joslyn rise to the occasion and deliver some TLC realness. Adore’s spunk and charisma have gotten her very far in the competition and she’s successfully found a way to challenge her energy into her performances. Bianca continues to be consistent and knows how to make her style of drag work for any occasion and Joslyn shows us yet again that she is not one to be underestimated.

In the end Adore wins her first challenge despite the fact that she looks like a hot mess every time she hits the runway. In a surprise twist it is Milk (not Darienne) who ends up in the bottom with Trinity. And while Milk does her best lip sync, it is clear that rap is not her forte and she is sent home packing by Trinity. Bye Milk, it was nice knowing you and your beard.

Welcome back to the #1 spot, Bianca! Bianca’s been in the top three for almost every challenge and she continues to win over fans with her mama bear persona. Yes, she may be bitchy but she is always honest and at the end of the day she cares about her fellow queens. Bianca’s only downfall is that her runway looks have a tendency to look very similar. But kudos to you for softening your makeup! I’ll be very surprised if you don’t end up in the top two.

In Ben’s defense, who the fuck expected there to be a rap battle this season? Ben did the best she could given how out of place she was and she served yet another good luck on the runway. It’s probably for the best that Ben was not in the top three for this challenge because it will make her seem more humble and keep her from getting her ego inflated.

If Adore takes the judges’ critiques to heart and fixes her fucking hemlines she’ll be unstoppable. It’s clear that Adore is in it to win it and that she now knows that she can’t rely on personality to get her through the competition. She’s funny, smart and pretty with a type of star quality you can’t ignore but if she doesn’t fix her fashion there’s no way she’ll keep this spot.

Courtney Act is an incredibly talented queen- it’s so unfortunate that we’ve yet to see that on this show. While she may be the prettiest competitor she has been the most disappointing and boring. She needs to step up her game and stop relying on her body if she wants to stay in the running to be America’s Next Drag Superstar. And her latest stint in Untucked won’t help her much- Courtney reading the other girls for their appearances made her seem nothing more than a superficial, beauty obsessed queen. 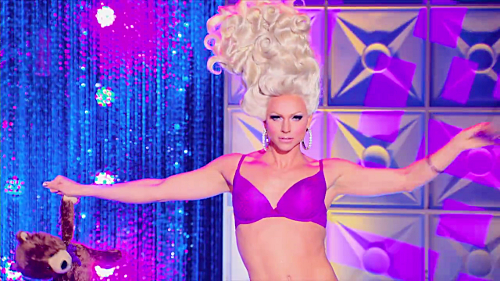 Joslyn has been doing surprisingly well this entire competition and it seems even when she’s not at her best that she flies under RuPaul’s radar. The main issue with Joslyn is that her fashion is not on point and that her runway looks come off as cheap and cluttered. Girl fix your face and your fashion and the competition is yours. And don’t let those bitches get you down- you’re a lot more talented than they say.

Oh Lasangna, what are we going to do with you? I’m sorry that the judges don’t love you as much as you love yourself but you need to realize that your attitude isn’t doing you any favors. Laganja is a jealous, deeply insecure queen who comes up with an excuse for everything. Girl if you can’t stand the heat then get out of the kitchen, hokay? 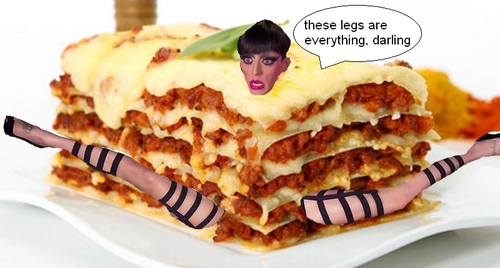 Trinity knows how to lip sync, I’ll give her that. But that’s all I’m going to give her.

In Milk’s defense, Darienne should have been in the bottom two instead of her. But we all knew that Milk would go home sooner than later which makes me okay with this elimination. Milk is a character but her character isn’t fully realized and she didn’t have the experience necessary to fully execute any of her designs. And the issue with having such an outrageous fashion sense is that it simply highlighted how passive her personality was when it came to the challenges. Sorry girl, but you are just passed your expiration date.