As a person I’ve always prided myself on my stability of character. I like to think that I act the same way regardless of circumstances or who is in my company. And while I am capable of telling a lie or two, I like to believe that I’m a honest guy who never represents himself in a false way. I’m a “what you see is what you get” type of person.

Being true to yourself is usually seen as a noble thing. But what I’ve learned over the past few years is that there is nothing more frustrated than knowing what you are capable of doing without understanding the root cause of it.  While I am a friendly, humorous (in my opinion) person I know that I can be extremely distant, thoughtless and self-motivated. And while I am the first person in the room to crack a joke or offer advice, I’m the last to reach out a helping hand and the last to consider how my actions may negatively impact others.

While I am not entirely sure of the roots, I like to think that my more negative qualities grew out of some twisted form of self-preservation and a response to childhood trauma. I believe that as a result of my childhood I became distant so that I could protect myself. I think that I convinced myself that if I turned off my emotions, if I stopped feeling things, that it would be better for me. I thought that it would be better for me to feel nothing than feel sad or angry all the time. I think because of my situation, because of my belief  that I had no control in my own life that I became self-motivated. I learned to look out for myself, which was a noble thing until it turned into me only doing things that furthered myself and no one else. And lastly, I attribute my thoughtlessness to my overactive imagination. I’ve always been the creative type but I think somewhere down the road I started letting the pleasure of my daydreams supersede my everyday issues. I made the decision to live in the world I wanted to live in rather than the one I actually lived in.

It’s difficult distinguishing between what is learned behavior and what is innate. I’d like to think that who I am is something more innate, that my more negative qualities are just a part of who I am. It’s easier to accept that than acknowledge that my negative behaviors were learned and thus capable of changing. Because as much as people say they love change, we aren’t the most adjustable when it comes to changing ourselves. And it can be difficult to admit that your uglier traits are a response to circumstances because it shows that you were too weak in character to hold onto your true nature in the face of trauma or conflict.

What I think is so important about college and our entry into the real world is that it tests out this learned behavior vs innate behavior issue. Being away from home and the environment that shaped us helps to put everything in perspective. At school I am a lot less distant and self-motivated. I’m still extremely thoughtless, but I’ve found that I’m a lot more easygoing and a lot less angry and emotionally abusive. And it’s strange- when you realize that you’re different at school than you are at home, without being disingenuous. We all know family members are the one who love us through the good and bad- but things are more complicated when you realize that being home stresses the bad more than good. And while I love my family- I often hate the person I am when I’m around them. It’s as if all of the years and all of the baggage draws out the person I no longer want to be. And it’s a hard thing to swallow- the notion that those you love are the ones who bring out the worst in you.

I’ve always had a vague dream about what my life would be like when I was fully independent. I can’t imagine what specific career I’ll have or who I’ll be married to, but I just picture myself far away. I picture myself being at peace with all of the good and bad in me and secure in my own identity. But I don’t really picture my past alongside me. I hope that I’m able to address the ugly side of myself without having to compromise where I came from. I hope that I realize being resentful is only hurting myself and no one else. And I really hope that I don’t forget all of the opportunities I’ve been given in life  just so I can feel justifiable in my own anger.

My mom once told me that she thinks that when I’ve graduated college that I’ll move far away and only call on Christmas. In fact, I’ve been accused on more than occasion by family members that I only visit or call when I’m in need of something. And it hurts- even if it may be true. It hurts to think that I would let my own demons destroy any familial relations that I have. And while I certainly wish that my family members had made better choices in their lifetime- I know that I could be a better son and brother. And what I’ve begun to realize is how much of my life isn’t about just me, you know? I’ve realized that we all exist in a joint world and that things aren’t only just about me. I may have the freedom to marry whoever I want and move to wherever I want, but at the same time I’m a piece of someone else- my mom and the rest of my family. And while we may be free in life- we do owe other people things in life. My mother has done a tremendous amount of things for me (not limited to giving birth) and sometimes I have to remind myself that I only exist because of her. I am indebted to my mother and my family  and while I do believe in the whole “family is just blood” philosophy to an extent, I know that resenting those who love us most won’t bring any real peace.

With all this being said, I know I still have a lot of growing to do. And I know that my behaviors come with accountability. I may have accepted that I can be extremely self-motivated, but I also know that how I wield my negative traits is up to me. I know that if I hurt someone else, regardless of whether or not that behavior was in my nature, that it is my fault. Whether or not I have these negative behaviors as a result of my upbringing or deep rooted issues is irrelevant. As an adult, I have the power to right my wrongs- and while I am glad I am aware of the negative qualities I possess- I know that it’s what I choose to do in spite of my shortcomings that defines me as a person. 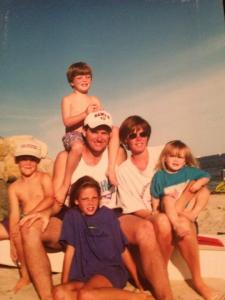 6 thoughts on “The Family Issue: What to Do When Those You Love Most Bring Out The Worst In You”