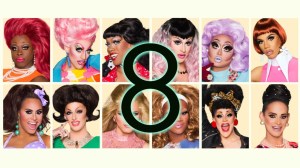 Hello, knaves! Welcome back to my FINAL RuPaul’s Drag Race recap where I try not sob uncontrollably over the end of what has been one of the greatest seasons of Drag Race. But before we weep over the end of season 8, or give thanks to the *gawds* for the announcement of All Stars 2, let’s discuss the crowning of America’s Next Drag Superstar!

The reunion special was chock-full of wonderful warmup performances from the likes of Kennedy Davenport, Trixie and Katya, and the whole Hause of Edwards (with some incredible cameos!) The biggest show-stopping moment, however, was the arrival of Mama Ru, who looked beyond stunning. She looks so good it’s hard to believe sometimes that there’s a black Pee Wee Herman under all that makeup!

While season 7 may not be the fandom’s favorite season, it had a great reunion format, which last night’s reunion replicated to great success. Each of our top 3 queens took to the stage and lip-synced an original song written just for them. Bob the Drag Queen entertained the audience with his rendition of “I Don’t Like to Show Off”, a campy number that riffed on his showboating nature. Following the lip-sync, Ru and Bob engaged in a wonderful heart-to-heart, one that solidified Bob’s standing as the most-obvious pick for top queen. It’s fair to say that Bob had the best track-record this season. His looks may not have always been memorable, but his star power and raw talent were both completely undeniable. Given that this is an election year, it was great to see a queen as politically motivated as Bob take center-stage. Bob could do some great things with the platform of Next Drag Superstar.

Up next was Kim Chi! Fresh off the success of her hit single “Single”, Kim performed a rousing rendition of “Fat, Fem & Asian”, which was about 90% standing and 10% transcendent epileptic dancing. Kim’s interview with Mama Ru was great, and thankfully missing any excruciatingly awkward moment with Kim’s mother. While Bob may have been the clear front-runner, Kim really gave him a run for his money this season. Her looks were outstanding, and she may go down in herstory as the most vulnerable and charming queens to ever grace the main stage. She doesn’t need the crown to become America’s Next Drag Superstar- she IS America’s Next Drag Superstar!

Last but not least, Naomi Smalls! Let’s be real- Naomi had absolutely no chance of winning the crown last night. She really slayed the latter half of the season, but her earlier track-record made it nearly impossible for her to take home the win. With that being said, her rendition of “Legs” (not to be confused with “Legs” by Laganja) was fun and sexy. Her interview with her family was endearing as well. Naomi was a beauty queen with a heart of gold, a refreshing departure from last season’s stunning ice queen, Violet Chacki. She may not have won this season, but she did get the stamp of approval from Naomi Campbell, so she’ll be okay. On a side note- can we talk about the celebrity cameos?! Carol Channing, Nancy Grace, Lena Headey, and Margaret Cho! Come thru, celebs!

The second half of the reunion was dedicated to interviews with our remaining queens. Seeing all of them onstage once again highlighted just how fierce the competition was this season. It’s still hard to believe that queens as strong as Acid Betty and Thorgy Thor didn’t crack the top 5! Hopefully All Stars 3 bring back all of our favorite season 8 girls.

The crown for Miss Congeniality goes to the much deserved Cucu queen, Cynthia Lee Fontaine! It’s nice to see the award go to the truly most congenial and not just the queen people felt was most robbed! Also, thank you Katya for making sure Motha stays hydrated!

Before we get to the final crowning, let’s take a moment to clap for the previously crowned queens for their STUNNING looks! They all looked gorgeous- especially our previously reigning queen, Violet Chachki! Just take a look at this hooker:

And America’s Next Drag Superstar is…..BOB THE DRAG QUEEN!

No surprise there! Congratulations to our new queen and top three for an incredible race this season. Season 8 was the definition of C.U.N.T. Hopefully All Stars 2 is even better!